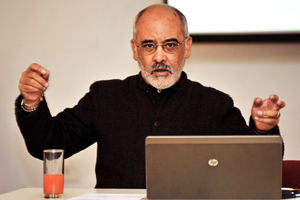 Step up: Deputy Vice-Chancellor Prof Crain Soudien: "We should consolidate our gains and build on them."

The results of the 2012 Staff Climate Census show that UCT staff experience the university positively, and say that it encourages identification and elicits a sense of pride.

Deputy Vice-Chancellor Professor Crain Soudien, who holds the transformation portfolio, said he is happy about the general shift in the outcome, as satisfaction levels had risen markedly over surveys in 2003 and 2007.

"They certainly show a step up from the 2007 census," he said. "We should consolidate our gains and build on them." But several issues remain and so require action in phase two of the census, Soudien added.

"A qualitative survey will tackle the aspects of life at UCT and of its institutional culture that concern us. A task team has been established to target areas of dissatisfaction and much of the important work will happen here, as was the case in 2007."

The 2007 census yielded several strategic interventions with far-reaching implications for the transformation process: the appointment of an Ombud, the establishment of the Transformation Office, revised discrimination and sexual harassment policies and an alternative dispute resolution process.

Women academic staff were less satisfied than their male counterparts, while there was a balance between men and women among PASS staff.

In general, black and coloured academic staff (particularly coloured staff) were consistently less satisfied than the norm. "We need to remind ourselves that South Africa is only 20 years out of that [period in history]," Soudien said. "We're grappling with the institutionalisation of new cultures, and new ways of engaging with the differences we bring to our encounters with one another. We're more comfortable with each other than we were, but we need to be conscious of the need to shape this and not let it happen by itself."

In addition, over 800 comments raised three broad areas of concern: onerous and inconsistent performance and reward system (PASS staff), feelings of being treated unfairly because of the employment contract, especially those on soft funding (academic staff), and unfairness of work load, particularly at junior academic level.

These areas elicited most dissatisfaction: