Feast of talent on show at VC Concert

There are few things that might draw one outdoors on a Cape winter's eve (it was a dark and stormy night) and the opening performance last week of the annual Vice-Chancellor Concert was worth the umbrella and coat; a smorgasbord of talent from the schools of music, opera, and dance.

The concert is VC Dr Max Price's tribute to staff (and their families) for the hard work and long hours that contribute to UCT's world-class reputation. Some 1 240 tickets were taken up for the two performances, the second taking place on 15 August.

This year's programme delivered a few surprises: a pre-concert performance in the Baxter foyer by the School of Dance, items by the student-run UCT Choir, and the South African College of Music's Dizu Plaatjies, who set aside his music for the role of MC. 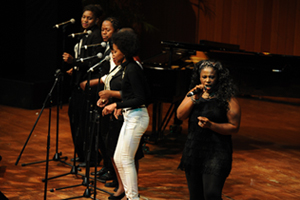 Big voice: Jazz singer Sange and her group teamed up with the UCT Big Band.

Interspersed were performances by organist Erik Dippenaar, the UCT Brass Quintet, and jazz singer Sange and her group, which also teamed up with the UCT Big Band, presided over by the evergreen Mike Campbell.

Rising stars like Mpofu are changing the Eurocentric face of opera and underscoring the importance of the opera school fundraising campaign.

Price used the occasion to announce senior appointments. Ensor's successor is alumnus and professor of sociology Professor Sakhela Buhlungu, who will take the reins in January 2014. These also include Andre Theys as executive director of the Properties & Services Department, Dr Russell Ally as executive director of the Department of Alumni and Development, and Associate Professor Suellen Shay as Dean of the Centre for Higher Education and Development.