UCT footballers go down to NMMU 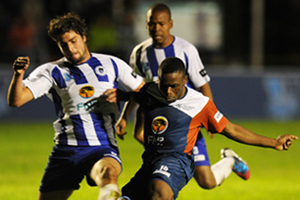 On the ball: Cloudius Sagandira of NMMU beats UCT's Byron Donaldson to score during the Varsity Football match on the Green Mile last night. UCT lost 4-0.

Despite a valiant effort, UCT went down 4-0 to Nelson Mandela Metropolitan University (NMMU) in their Varsity Football match at the Green Mile on Monday 29 July.

A Cloudius Sagandira hat-trick sunk the UCT team, who went into the break 2-0 down.

The victory was the Eastern Cape team's second consecutive win. Last week they beat University of the Western Cape 2-0 in Bellville.

NMMU's first goal by Leroy van Rensburg came after a bad tackle on a slippery surface in the box resulted in a penalty.

UCT fought back and created some chances of their own by exposing NMMU's faltering defence, but could not find the net.

It was the visitors who scored next, and twice again after half-time, thanks to three goals by man-of-the-match Sagandira.