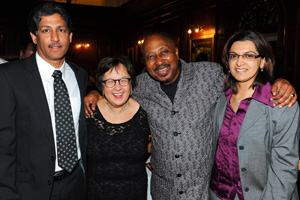 Rich in years: Dean of the Faculty of Health Sciences Prof Marian Jacobs (second from left) graduated from UCT in 1971, continued with her internship and studies at the university, and served for 31 years as an employee. She was photographed with (from left) Nisaar Ahmed, DVC Prof Thandabantu Nhlapo, and Miriam Hoosain, ED of Human Resources.

There were some famous and familiar faces at this year's annual Retirees Dinner, held in the stately Smuts Dining Hall to bid farewell to those taking their leave of the university.

Among them were Professor Marian Jacobs, Dean of the Faculty of Health Sciences, and Dr Loveness Kaunda, director of the International Academic Programmes Office International Office.

The retirees have contributed hundreds of combined years of service to the university, with Pat Thompson of the Faculty of Health Sciences having spent 40 years at UCT.

"No matter how long you've been at UCT, you've all played a part to make this institution one of which we are all immensely proud, and one which is internationally acknowledged for its excellence," Vice-Chancellor Dr Max Price told the retirees.

Price noted that he was "struck" by the calibre of UCT's staff, adding that it takes more than professional skills or academic expertise to make a contribution to an institution like UCT.

"You've all given generously in terms of professional skills; and more than that, you've given yourselves to make this a community, a community which binds people and which becomes, over time, something of a family - so each can identify with it, and it's not just a place to go to work."

Price urged the retirees to retain their links with the university, and, where there is opportunity, "allow us to benefit from your huge experience".

Responding on behalf of the retirees, Eric Bill Randall said he had spent 37 years at UCT because he was "in the right field, at the tight time, and there were the right people to lead the way."

"Most of the retirees have had rewarding experience at UCT, and most have mixed feelings about leaving."