UCT on an "upward trajectory", according to 2011 research report 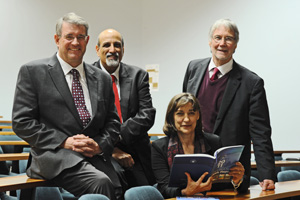 The new-look UCT Research Report, the 2011 edition of which was launched recently, is largely a tribute to the institution's researchers who play an important role in ensuring that the institution retains its position as the leading research university in South Africa.

In addition to highlighting the achievements of individual researchers, the 2011 report also details a range of interdisciplinary research areas in which UCT is making an impact both nationally and internationally. In a departure from previous years, when the report listed research publications under the different faculties, the 2011 research report is organised according to these research areas, which include poverty and engineering, water management and climate change.

Organising the report in this way is achieving a long-held goal, said Vice-Chancellor Dr Max Price, of breaking down faculty boundaries. Price added that the 2011 report showed that UCT is on "an upward trajectory". So, for example, funding to postgraduate students increased by 13% to R135 million. In addition, funding to postdoctoral researchers grew by 16% to R44 million.

"In both cases these figures were well above the inflation rate," said Price. "These are phenomenal growth figures and we are very proud."

UCT also received the highest publication count subsidy from government, based on over 1,200 units of research publication. UCT hosts 28 national research chairs awarded under the South Africa Research Chairs Initiative, aka SARChI, with a further four awarded under an earlier call by the Department of Science and Technology and the National Research Foundation (NRF). Three of the four P-ratings, for up-and-coming young researchers, awarded by the NRF went to UCT researchers in 2011. And two A-ratings - marking these researchers as international leaders in their fields - were awarded to Professors Ed Rybicki and Heather Zar, reported Price.

At the launch, hosted by Professor Danie Visser, deputy vice-chancellor responsible for research, Professor Salim Abdool Karim, president of the Medical Research Council and the keynote speaker, congratulated UCT on its impressive research record. He also stressed that the three prerequisites for scientific success are freedom of thought; persistence; and intolerance towards mediocrity.

Publications and faculty profiles appear on the CD attached to the back of the report, as well as online. Copies of the 2011 research report may be requested from the Research Office. Or Contact Christina Pather .