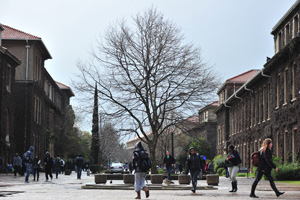 The QS system also ranks UCT as the only university in Africa in the top 200 and seventh in the top ten BRICS universities (universities from Brazil, Russia, India, China and South Africa).

Five South African universities made it into the top 700.

In addition, UCT performed well in the Shanghai Jiao Tong Academic Ranking of World Universities (AWRU), released in August this year. The ARWU ranking for UCT remains unchanged - again placing the university in the 200-300 range and as the top university in Africa.

Wits University (Top 400) and the University of KwaZulu-Natal (Top 500) are the other South African universities that made the list.

"A critical factor in achieving success as a higher education institution is found in the quality of the staff," said Gerda Kruger, Executive Director: Communications & Marketing Department. "UCT is blessed to have staff of world-class quality who are able to compete and participate at the highest level in the global knowledge economy."

The university recognises that while these rankings may be flawed, they are not without merit.

"Although UCT is mindful of the criticisms and debate surrounding ranking methods," adds Kruger, "we are happy with UCT's consistency and continue to strive for excellence in our academic endeavors as well as our contribution to society as a whole."

These rankings also serve the university well in many ways, she observes.

"A good performance in the rankings sends the message that South Africans can get a world-class education at home. Furthermore, prospective students and staff the world over also use the rankings to decide where to study and work. Our reputation also facilitates our many research partnerships with other universities in the country, in other parts of Africa and the rest of the world. These partnerships undoubtedly further contribute to our research efforts and reputation."

The Times Higher Education (THE) World Rankings are expected in October. Last year, UCT ranked in the top 200 on the THE rankings.