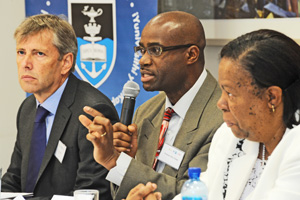 Big news: Prof Kelly Chibale (centre), here with Dr Tim Wells of MMV and Minister Naledi Pandor, speaks about the compound MMV390048 that he and international collaborators hope will lead to the development of a single-dose treatment for malaria.

A compound discovered by a UCT drug discovery programme has been selected by MMV for its potent activity against multiple points in the malaria parasite's lifecycle.

A recently-discovered compound - named MMV390048 - from the aminopyridine class not only has the potential to become part of a single-dose cure for all strains of malaria, but might also be able to block transmission of the parasite from person to person, according to a research collaboration involving the Medicines for Malaria Venture (MMV), based in Switzerland, and the Drug Discovery and Development Centre (H3-D) at UCT, directed by founder Professor Kelly Chibale.

This was announced at UCT on 28 August.

On the basis of initial results it was selected by MMV for further development - making it the first compound researched on African soil to enter preclinical development in partnership with MMV.

An African solution to save lives

Naledi Pandor, the Minister of Science & Technology, said: "This is a significant victory in the battle to alleviate the burden of disease in the subcontinent. Clearly the war on this disease is not yet won, but I am excited by the role that our excellent scientists have played in this milestone in finding a potential cure for malaria, and possibly preventing its transmission.

"Congratulations to Professor Kelly Chibale and all involved. This is evidence of the world-class science being done in South Africa and the continent, and of the power of continental and international scientific collaboration in the multidisciplinary approaches that are essential to addressing the societal challenges of our time."

Vice-Chancellor Dr Max Price said: "H3-D was founded at UCT in 2010 for this very purpose: to develop African expertise towards solving the health problems that beset the developing world. We trust this clinical candidate is the first of many contributions Professor Chibale and his team will be making to the advancement of international medicine." 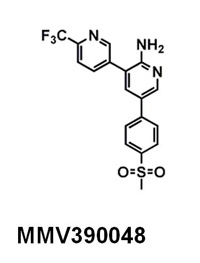 H3-D identified a molecule, code named MMV390048, which was selected by MMV's Expert Scientific Advisory Committee in July 2012 for further development. The promising new compound shows potent activity against multiple points in the malaria parasite's lifecycle. This means it not only has the potential to become part of a single-dose cure for malaria, but might also be able to block transmission of the parasite from person to person.

The aminopyridine series was initially identified by Griffith University scientists in Australia as part of MMV's extensive malaria screening campaign of around 6 million compounds. A team of scientists from H3-D, led by Chibale, further scrutinised and explored the antimalarial potential of the series. With parasitological, pharmacological and contract chemistry support from the Swiss Tropical and Public Health Institute (Switzerland), the Centre for Drug Candidate Optimisation at Monash University (Australia) and Syngene (India) respectively, the H3-D team selected the most promising compounds from the series to be optimised and retested.

In just 18 months the team had identified and developed a candidate suitable for preclinical development.

Equipping the next generation of African scientists

"We are very excited that this promising compound, researched by African scientists, has been selected by MMV for further development," said Chibale. "This is truly a proud day for African science and African scientists. Our team is hopeful that the compound will emerge from rigorous testing as an extremely effective medicine for malaria - a disease that accounts for 24% of total child deaths in sub-Saharan Africa. What is more, H3-D and MMV achieved MMV390048 as a clinical candidate in record time. In the process we have developed a unique model for successful technology platforms, and generic modern pharmaceutical industry expertise and skills, to discover drugs in potentially any disease area in Africa."

Dr Tim Wells, MMV's Chief Scientific Officer, added: "This is a great achievement and an excellent example of the quality of research that can be fostered in Africa. We look forward to seeing more exciting compounds emerge from Kelly's team and are proud to be collaborating with H3-D; not only is it conducting excellent science today, it is also providing world-class training for the next generation of African scientists."

The clinical candidate is in line to enter clinical trials in late 2013.

What is so unique and exciting about MMV390048