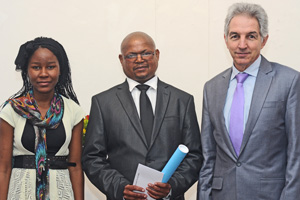 His "excellent" results - achieved against all odds - kind of speak for themselves.

But there was a lot more said of teacher Phuti Ramarope when the Centre for Higher Education Development (CHED) presented him with this year's Stella Clark Teacher's Award on 13 July.

Between 2008 and 2011, Ramarope's grade 12 learners at Sinthumule Senior Secondary School in Thilwavhusiku, Limpopo, obtained a remarkable 100% pass rate in physical sciences. In life sciences, which Ramarope teaches grades-10 to -12 at the school where he is also a deputy principal, every one of his matriculants passed in 2008 and 2009. The pass rate dropped to 82% in 2010 (when the subject came last in the national results), but picked up again last year to 92%.

As Hilda Khunoana, the first-year UCT chemical engineering student and a former learner of Ramarope's who nominated him for the award, put it, Ramarope stands out for the "love, passion and knowledge" he has invested in his teaching.

"Every weekday he would be at school teaching before school starts, teaching during study time and sometimes he even goes beyond study time until six o'clock at night to motivate even the weakest learners," said Khunoana. And on Saturdays Ramarope would be found at the school and at other schools in the district helping some more learners.

That was not all.

Teaching subjects that require practicals at a short-staffed school with no laboratory or a library means Ramarope has to improvise. He had no problem stashing laboratory lizards and rats in his home refrigerator.

He would tell his learners to, likewise, think on their feet.

"I always tell my class not to wait for teachers to do experiments but to go out there and improvise."

Also, he finishes his syllabus early, motivates his learners to aim for a better mark so they can be eligible for bursaries, and encourages learners to ask questions until they fully understand the lessons.

The award, in its seventh year, is made in remembrance of the late Stella Clark, who was a senior lecturer in the Language Development Group in CHED until her death in 2005. The award was established through donations from her family, friends and colleagues from South Africa, the UK, the US and Japan.

Vice-chancellor Dr Max Price said the accolade is important because UCT depends on the school system for its students, and teachers are key in influencing learners to aspire to come to the university. It also links the university with the most remote schools in the country.

"This is our small signal of appreciation to the excellent teachers and to the teaching profession in general," Price said of the Stella Clark Award.