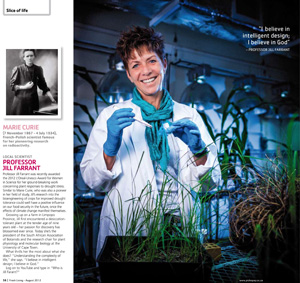 Taking a leaf: UCT's Prof Jill Farrant is featured in the August edition of Fresh Living.

Not only does Fresh Living list Professor Jill Farrant as one of its local heroines, but in its latest edition the lifestyle magazine also draws some very flattering comparisons between the UCT scientist and the famed Marie Curie.

Farrant, winner of the 2012 L'Oreal-UNESCO Award for Women in Science, is one of five women whose praises are sung in the magazine's Local Heroines feature in its August edition, part commemoration to Women's Day tomorrow. These "five phenomenal SA women", reads the blurb, have been chosen because their "achievements echo those of their famous counterparts".

Farrant's counterpart is Curie. Like Curie, reads the column, Farrant is a pioneer. "Jill's research into the bioengineering of crops for improved drought tolerance could well have a positive influence on our food security in the future, once the effects of climate change manifest themselves," reads the article.

Watch the L'Oreal video on Farrant.