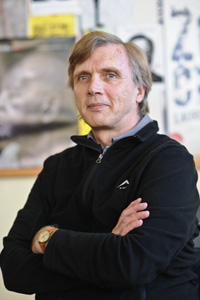 Cape TownTM is no haiku.

Instead, this sweeping 1,700-word poem - for which UCT's Professor Kelwyn Sole has received the 2011 Thomas Pringle Award for poetry - soars from Table Mountain, to the city's suburbs and townships, to the ocean. And lest those sightseeing references and the trademark sign mislead, the poem is anything but a tourist brochure or a celebration of consumerism.

Instead, Sole, of UCT's Department of English Language and Literature, writes of tik houses and security walls and a city's residents lost in shopping malls, soccer stadiums, online shopping and cellular phones; with a dollop of self-reflection on a poet's toil.

The judges for the award, which is administered by the Academy of English of Southern Africa, hailed the "telling metaphors, the self-reflective and self-critical quality of the poem, and the combination of a sharp perception of place and nature with precise social criticism".

Cape TownTM, first published in the journal New Contrast in 2010, marks Sole's third accolade from the Academy. In 1989 he won its Olive Schreiner Prize for Poetry as a "new or emergent talent" with his first collection, The Blood of Our Silence. He also picked up the Thomas Pringle Award for Literary Criticism in 1998.