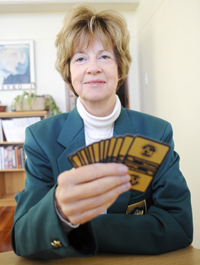 Ace up her sleeve: Prof Kathy Driver plays her cards close to her chest in preparation for her participation in the World Bridge Olympiad.

There'll be plenty of opportunities to do that in France where Driver, UCT professor of mathematics and applied mathematics and former dean of the Faculty of Science, will be part of the seniors bridge team representing South Africa at the World Mind Sports Games (WMSG) in Lille next month.

The seniors team, which includes Driver's husband Gordon, will be one of three SA teams taking part in the event's World Bridge Olympiad. Bridge is one of the five mind sports that will be contested at the WMSG - the second - from 9 to 23 August, the others being chess, draughts, the Chinese board game go (or weiqi) and Chinese checkers.

Driver's interest in the card game began in 1971 when a friend took her to a bridge club in Johannesburg. That was the same night she was introduced to a young man named Gordon Driver.

"I was immediately fascinated by the game," says Driver.

This is not the first time she'll be playing bridge for her country. In 1978 she competed for South Africa in the World Bridge Pairs competition, this during a period when she was playing the game full-time.

The competition will be tough, but Driver hopes that Team SA will reach at least the knock-out stages of the World Bridge Olympiad.