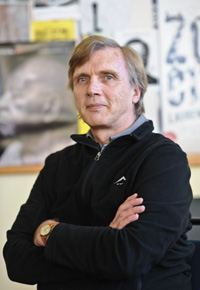 Cape TownTM is no haiku.

Instead, Sole, of UCT's Department of English Language and Literature, writes of tik houses and security walls and a city's residents lost in shopping malls, soccer stadiums, online shopping and cellular phones, with a dollop of self-reflection on a poet's toil.

The judges for the award, which is administered by the Academy of English of Southern Africa, hailed the "telling metaphors, the self-reflective and self-critical quality of the poem, and the combination of a sharp perception of place and nature with precise social criticism".

Cape TownTM, first published in the journal New Contrast in 2010, marks Sole's third accolade from the Academy. In 1989 he won its Olive Schreiner Prize for Poetry as a "new or emergent talent" with his first collection, The Blood of Our Silence. He also picked up the Thomas Pringle Award for Literary Criticism in 1998.

Like most of his works, Cape TownTM started off as impromptu pieces that later "cohere" into a specific theme or poem, says Sole, who recently released his sixth collection, Absent Tongues.

"This poem was a way to channel a lot of emotion about the state of my city and my country; there's an amount of anger and frustration in the poem," he says. "It's the necessity of structuring the poem that allows me both to tame these emotions, and gain a more distanced '“ let's let's say 'objective' '“ view of them, and of their subject matter."

There will be other UCT connections at the awards ceremony on 15 June. UCT graduate and playwright Nicholas Spagnoletti was named the winner of the Olive Schreiner Prize for Drama for his work London Road.

Fellow UCT alum Leonie Viljoen, now associate professor at the University of South Africa, will present the event's keynote English Academy Percy Baneshik Lecture, in which she will, among other things, pay tribute to the late John van der Westhuizen, one-time De Beers Professor of English Language at UCT.