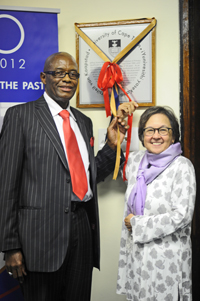 The Barnard Fuller Building, Medical School HQ, was completed and commisioned in 1982. Conference rooms 1 and 2 (considered to be one room), as well as 3 and 4, have been known as such since then.

The building itself was named after E Barnard Fuller, a South African doctor trained in Edinburgh who served as chairperson of UCT Council from 1938 to 1945.

Fuller was also one of the champions of the establishment of the UCT medical school.

As part of its centenary celebrations, the Faculty of Health Sciences renamed the conference rooms in 2012.

On 18 April, conference room 4 was renamed the Frances Ames Room, in honour of one of South Africa's most respected doctors and human rights activists, an emeritus professor of neurology at UCT who died in 2002.

On 26 April, conference rooms 1 and 2 were renamed the Jeffrey Dumo Baqwa Room. Baqwa served as the first professor of primary health care at UCT from 1995 until his untimely death in 2001.

The last renaming is scheduled for 4 October, when conference room 3 is to be named after Dr Aadil Moerat, who was fondly known as the 'people's doctor' before he was killed at his practice in Gugulethu in 1998.