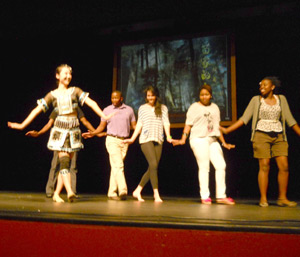 The dragon is a revered Chinese symbol of power, superiority and rule. And the Confucius Institute Spring Festival Gala, hosted by UCT's Confucius Institute to celebrate the year of dragon, was as compelling. With dance, song and traditional Chinese music, a student art troupe from Renmin University of China in Beijing captivated the hundreds of Cape Town revellers who flocked to the Baxter Theatre Centre on 21 March.

The group, which also performed at other universities in Southern Africa, was sent by the Confucius Institute headquarters in China in accordance with its promise to continue cultural tours, lectures and giving life to its teaching exhibitions.

At the event, also attended by Tong Defa, deputy consul-general of the Consulate General of the People's Republic of China in Cape Town, the group also performed solo and group dances of the Tibetan, Miao and Dai minorities in China, as well as performances on percussion and other traditional musical instruments of the Uygurs and Mongolians.