End of the road for brave Ikeys 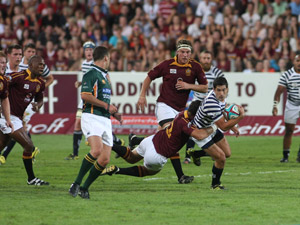 Tight spot: The Ikeys couldn't stop the Matie juggernaut, but UCT's Nick Holton was among those who gave grounds for optimism..

And so it ends.

The UCT Ikeys were beaten 5-45 by the University of Stellenbosch's Maties at the Danie Craven Stadium on Monday night, mathematically ending the defending champions' chances of stealing a semi-final berth in the 2012 FNB Varsity Cup.

It was a matter of same old, same old, as too many unforced errors from UCT let down what was, despite the score, a brave performance.

A dominant Maties pack laid the foundation for an avalanche of tries for the home side, and it was only after conceding 29 unanswered points that UCT hit back through No 8 Rayn Smid. But Smid's scintillating 80-metre touchdown couldn't mask the fact that the Ikey class of 2012 just didn't have enough in the tank.

Two more Maties goals in the second half rubbed salt into the defending champions' wounds, and UCT rugby will be scratching its head as to where it all went wrong. The mass player exodus after last season seems to have set Kevin Foote's team back a step too far, and no doubt they will be making the hard yards to make sure fortunes improve.

There are certainly signs of good things to come. Even against the Maties juggernaut, UCT strung together threatening phases and looked dangerous, as they have done all season, with a bit of space out wide.

The backline, in particular, provides more than a glimmer of hope. Flyhalf Nick Holton and inside centre Adrian Kritzinger were consistently classy performers behind a pack that didn't always dominate, and the back three of Dillyn Leyds, Damian de Allende and Mark Winter provided some thrilling moments in attack and defence.

Let's hope for a flourish in the final round-robin fixture against the University of Pretoria on the Green Mile next Monday. Bring your friends and your voices!