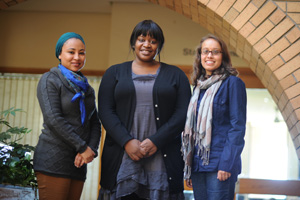 Returning to the fold: Sufia Singlee, Thabi Chanetsa and Salona Lutchman have completed their LLM studies and have now joined the academic staff in the Faculty of Law.

The Faculty of Law is reshaping its gender profile, courtesy of its recent fundraising efforts.

Over the past few months the faculty has appointed three women - including two of its graduates - on the back of its Law 150 campaign.

The three new appointments are Thabi Chanetsa, who lectured on the law of evidence in the first semester and is now teaching modules for the E-law course in the second semester; Salona Lutchman, who joined the faculty as a lecturer of law of succession; and Sufia Singlee, teaching labour law and business law.

The trio were among the five beneficiaries of the faculty's Academic Scholarships Programme (ASP) in 2010. As part of the ASP, which aims to attract graduates back into academia, participants were required to work as research and teaching assistants for a year on either side of an overseas LLM.

They all passed with distinction, and had the time of their lives.

Chanetsa says that she "thoroughly enjoyed" her courses, although she soon discovered that the LLM coursework load was not for the fainthearted. "There were many late night tears," she reports.

Lutchman described the programme as "an extremely rewarding academic experience, and I learnt as much from my peers as I did from my professors".

Singlee added: "Other than being a rigorous academic experience, my studies allowed me the opportunity to engage with and learn from people from all parts of the globe."

One of the other two awardees opted to return to a law practice, and the other one went back to KwaZulu-Natal.

Commented Professor PJ Schwikkard, dean of the Faculty of Law: "A 100% success rate would have been wonderful, but I am very pleased with a 60% result for academia and a 100% for South Africa as a whole."