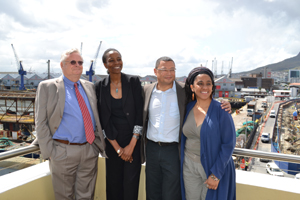 UCT's African Centre for Cities (ACC) will have a hand in selecting a Cape Town project (or projects) to receive the 2012 Deutsche Bank Urban Age Award, a major international prize focused on the world's cities.

The annual award, made by the Alfred Herrhausen Society of the German-based Deutsche Bank, is made to projects that come up with creative solutions to the problems - and opportunities - that face the billions around the world living in cities. In November, the Society named Cape Town as the 2012 recipient of the award, which is valued at US$100 000 (around R750 000).

Cape Town will become the fifth city from which such projects will be selected. Previous projects have won the award in Mumbai (India), São Paulo (Brazil), Istanbul (Turkey) and Mexico City (Mexico).

The award forms part of the Society's international Urban Age project and is run with LSE Cities, a centre at the London School of Economics and Political Science.

"With the population reaching seven billion, we need to ask ourselves how we govern and use our resources to create a sustainable future," said Pieterse. "The Urban Age award will recognise and honour people who despite the odds are making a difference and creating spaces for healthy cities."