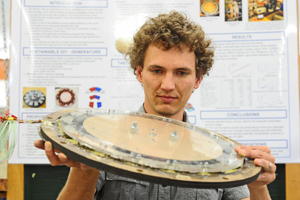 Round and round: Hartmut Jagau with the generator that he designed using magnet from discarded hard drives.

Jagau's design reuses the permanent magnets from discarded hard drives to create a sustainable generator. His work was supervised by Dr Azeem Khan and Dr Paul Barendse of the Department of Electrical Engineering.

"I felt honored," says Jagau, "since the IEEE ECCE conference is one of the best electrical machines conferences in North America. It was encouraging to bring the prize to South Africa and to see that our universities are indeed world-class."

Jagau would like to see the concept evolve into a fully working wind turbine.

"My hope is that it will develop into a fully functional wind energy conversion system which actually changes lives, rather than just proves a concept."

More than 1 100 people attended and over 600 papers were presented at the IEEE ECCE, this year themed Energy Conversion Innovation for a Clean Energy Future and held in Phoenix, Arizona.