Libraries' head Rapps up her revolution 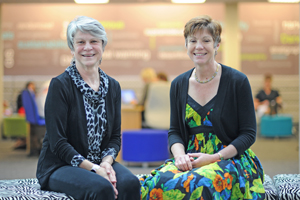 Hot seat: Joan Rapp (left) came to a UCT Libraries enterprise that was a decade behind the rest of the library world; she now leaves successor, Gwenda Thomas (right), a state-of-the-art, globally connected facility.

"I could not have had a better professional life," said Joan Rapp, outgoing executive director of UCT Libraries, who handed over the reins to Gwenda Thomas at the end of October.

In an interview with Monday Paper, Rapp spoke passionately about her time at UCT, saying "it was the people, not the things, that counted".

Rapp is credited with leading the university's libraries into the 21st century - taking them into the digital age and developing a Digitisation Unit; facilitating a huge increase in the number of Heritage Collections; and reconfiguring the spaces and staffing in the Chancellor Oppenheimer Library to serve the different needs of undergraduates and postgraduates.

In addition, she introduced a few peculiar traditions in the libraries - an annual Easter egg hunt, and an end-of-year review during which Rapp looked back at the year past and spelled out her vision for the year ahead - wearing red antlers.

Rapp will stay on until August next year, to help complete the Carnegie-funded Research Libraries Consortium project.

The six-year project, which will develop research support from the libraries in six research institutions in South Africa, is in its final year. It is credited with providing a whole generation of UCT librarians a practical education in their profession, as well as with increasing the visibility of the UCT Libraries internationally.

Her wish for the "post-Rapp era" is that the libraries continue to think of themselves as "a key part of a great global university" - and that they build on all the changes made.

The biggest challenge during her UCT career? "Initially, it was the one that came from the political situation in this country. The libraries were not communicating with other libraries, so they were not open to international influence. This made them a decade behind other libraries."

Thanks to support from Carnegie, Mellon and Ford, the country's academic libraries started working together and becoming more aware of trends.

Of her UCT career highlights, Rapp said: "I so enjoyed focusing on staff development. The decision to send people overseas allowed us to leapfrog over a decade of library development."

Another highlight was the "completely unexpected" Vice-Chancellor's Medal, awarded to her in 2008. The Carnegie Project had been another.

Paying tribute to Emeritus Professor Martin West, the former deputy vice-chancellor who appointed Rapp as the Libraries' executive director in 1998, she said: "He had a vision of what a good academic library could and should be. He - and the rest of the executive - supported me in every possible way."

Besides keeping her finger on the pulse of libraries, Rapp, the devoted owner of two rescued German Shepherds, can't wait to get more involved in animal charities.

"If I'd had my second choice of a career, I would have worked with animal charities all my life."

Rapp also intends improving her golf game along with her partner, Professor Ken MacGregor of the Department of Computer Science, who is also retiring this year.

"One thing I don't want to do is travel. I have travelled far too much. I just want to stay put in and enjoy Cape Town."