Farrant one of big five in the life sciences 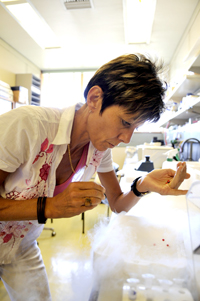 L'Oréal woman: Prof Jill Farrant is the third UCT woman - and the fourth from South Africa - to win a L'Oréal-UNESCO Award in Life Sciences.

Plant physiologist and winner of a Harry Oppenheimer Memorial Trust Fellowship Award, Professor Jill Farrant has added another feather to her cap: the L'Oréal-UNESCO Award in Life Sciences

Professor Jill Farrant is a proud user of L'Oréal products, but soon she'll have another item bearing that brand in her home. On 8 November, she was named one of five women from around the world to win a 2012 L'Oréal-UNESCO Award in Life Sciences.

It's the latest in a string of accolades for the National Research Foundation (NRF) A-rated researcher.

A quick count uncovers the Harry Oppenheimer Memorial Trust Fellowship Award, the first woman in the life sciences at UCT to receive the NRF A-rating, a spot in Mail & Guardian's Book of South African Women, and the South African Distinguished Women in Science Award from the Department of Science & Technology. Farrant was also in the running for a National Science and Technology Forum-BHP Billiton Award earlier this year.

The L'Oréal honour is no small fry, either. Lest anyone think L'Oréal a mere producer of beauty products and a brand renowned for its attractive spokespeople, the company has packed some serious scholarly weight behind the award.

An international network of nearly 1 000 scientists nominates the candidates for each year's awards, which form part of the L'Oréal-UNESCO Women in Science Programme. The five Laureates are then selected by an independent, international jury presided over by Professor Günter Blobel, winner of the Nobel Prize in Medicine in 1999.

Together these scientists run the gamut of life sciences, covering plants, epilepsy, diabetes, rotaviruses and bacteria in their work.

"The work of the 2012 Award Laureates yielded remarkable insights into human health issues," Blobel said in a statement. "Their research is truly original, and each is among the best in five distinct regions of the world."

The women are singled out for the major impact their research can have on society.

Farrant, who holds a UCT research chair in the molecular physiology of plants, is renowned for her multi-angled work on resurrection or desiccation-tolerant plants, which are able to withstand prolonged drought or water loss - a looming climate change issue - but will spring to life once water arrives.

Over the past years she's explored the roles that antioxidants and sucrose play in this Lazarus-like act, and is now trying to unpack the signalling pathways triggered by a group of lipids known as volatile organic compounds - and, in a recently published work, is attempting to get to grips with the genetic make-up of such plants.

It's work that could have a profound impact on the world.

"I believe in the potential outcomes of my work - ie the ultimate production of drought-tolerant crops, with the aim of addressing food security needs in Africa; which will become more important as climate change (increasing drought) continues to impact on agriculture."

As always, Farrant is at pains to point out that the many awards that bear her name are an acknowledgement of team effort.

"I have worked with amazing students and collaborators who have helped put me on this map," she says. "I might have initiated the research, and had many of the ideas that have been tested and published, but I alone did not do the work that has enabled me to receive such an award."

Farrant is the fourth South African woman, and the third from UCT, to receive the award. Previous UCT laureates are Professor Valerie Mizrahi, now director of the Institute of Infectious Disease and Molecular Medicine, in 2000; and Professor Jennifer Thomson, who also hails from Farrant's quarters in the Department of Molecular and Cell Biology, in 2004.

"Professor Jill Farrant is a truly deserving laureate," said Professor Danie Visser, deputy vice-chancellor for research. "This is yet another reminder of the telling impact that women have at UCT, and as the award demonstrates, on the world."

Farrant will pick up her award and prize money, US$100 000, at a ceremony at the UNESCO headquarters in Paris in March 2012.