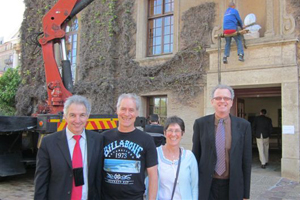 New Zealand-based alumnus and world-renowned sculptor Dr John Francis Gardner has donated a valuable bronze bust of former president Nelson Mandela to UCT. The 30kg bust, which rests on a plinth made of sandstone from Naboomspruit, was presented by Gardner to the vice-chancellor, Dr Max Price, during his visit to New Zealand recently. The bust has now been installed at Otto Beit building on upper campus.