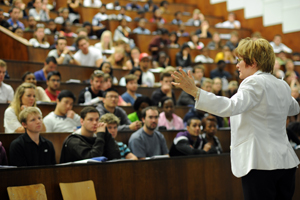 Invited to share her insights on strategic thinking in government, the leader of the country's official opposition filled the New Science Lecture Theatre (NSLT) on the morning of Friday 7 October. Zille, quoting famous Canadian ice-hockey player Wayne Gretzky, urged students to "move to where the puck will be", as opposed to where it currently is.

Remembering late entrepreneur Steve Jobs as a visionary and an inspiration for her own political career, Zille related the (present-day) Democratic Alliance's journey from being a party that won a mere 1.7% in the 1994 general elections, to one that can now garner at least 20% of votes cast.

Some students would perhaps have picked up that Zille was walking her talk - "creating a space to own". In between outlining her party's strategy to win the majority in the National Assembly eventually, a healthy serving of political rhetoric ensured that a good number of the next generation would certainly give more thought to donning blue at the next polls.