Big up for Pink Week 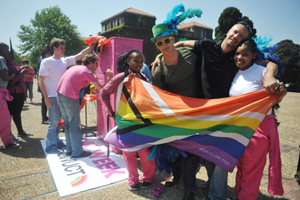 The overwhelming support of Pink Week, from 10 to 14 October, promoting lesbian, gay, bisexual, transgender, intersex and queer (LGBTIQ) rights, is testimony that UCT students are opposed to the stigmatisation of the LGBTIQ community that still exists throughout South Africa, says Students' Representative Council's Kathleen Taylor.

Taylor was speaking after the launch of the annual Pink Week. After the unveiling of the 'Closet', a symbolic closet placed on Jameson Plaza to highlight human rights violations such as prejudice and discrimination against the gay community, messages immediately scribbled on it were supportive.

But not everyone is singing the same tune. Most will remember that in 2010 the Closet was set alight.

Lindelwa Khowane, chairperson of RainbowUCT, Pink Week organisers, said such abuses are perpetuated by beliefs that LGBTIQ rights conflict with certain cultural and religious traditions. Nevertheless, most people are supportive of RainbowUCT's cause, and the organisation has grown in numbers, he said.

Vice-chancellor Dr Max Price noted that the Pink Week campaign is about recognising that, although South Africa has a Constitution that protects sexual orientation, society still stigmatises homosexuality. He called on students to endorse, support and celebrate Pink Week, and support those who are fighting stigma.