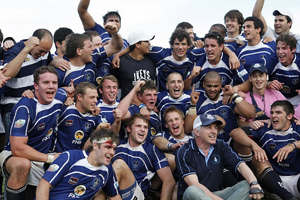 There can be few better illustrations of the expression 'rubbing salt into the wounds' than the Ikey Tigers' historic Western Province Super League win on 24 September, the club's first championship title since 1974.

Firstly, it pipped the mighty Stellenbosch University Maties - all but supreme rulers of the Super League these past years - by just one league point to clinch the title, finishing on 70 points to Maties' 69. The same Maties (secondly) from which UCT had snatched the Varsity Cup title this year.

And then, thirdly, the UCT team won the title by beating the Stellenbosch 'second team', Victorians, by 35-29 in their final match of the season. But boy, did they have all the Ikeys fans on the edge of their seats.

The Ikeys needed a full house of points going into the home match - a win plus a bonus point. (A victory alone wouldn't have been good enough, as Maties had outscored UCT by some margin over the season.) And down 5-22 after 30 minutes and 12-22 at half time, the title seemed to be slipping away.

But two tries by wing Mark Winter early in the second half put UCT in the lead (26-22), and three penalties by Nick Holton took them further ahead. A late Victorians try cranked up the tension, but the hosts held out for a famous title win.

"My boys are all heroes," captain for the day, Don Armand, told the Cape Argus.

As at the Varsity Cup final, vice-chancellor Dr Max Price was in the stands to provide moral support.

"It was a thrilling game, a brilliant climax to the year," he said after the match.

Also there to share the moment with the team were Butch Deuchar and Andy Donovan, two alumni from the team that lifted the 1974 Grand Challenge, as the championship was known then.