UCT women among the nation's finest 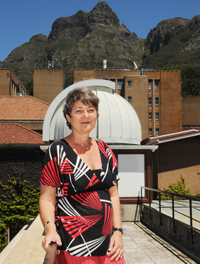 Honoured: Prof Renée Kraan-Korteweg (astronomy) is one of four UCT women honoured at the DST awards.

Four UCT scientists were named among the winners of the 2011 South African Women in Science Awards, announced and presented by the Minister of Science and Technology, Naledi Pandor, at a gala dinner at the Presidential Guest House in Pretoria on 19 August.

Professor Renée Kraan-Korteweg, head of the Department of Astronomy, was named the second runner-up in the life, natural and engineering sciences category of the Distinguished Women in Science Award.

Aisha-Bibi Pandor of the Division of Human Genetics won a Department of Science and Technology (DST) doctoral fellowship for her work.

The awards form part of the DST's efforts to increase the number of women scientists and researchers in the country.