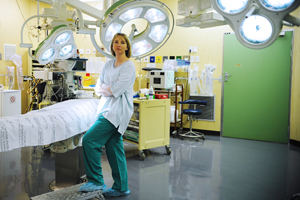 In 2008, Muller - based at UCT's Department of Surgery and at Groote Schuur Hospital - became the first surgeon in the world to transplant a kidney from an HIV-positive donor to an HIV-positive recipient. She and her team carried out this historic transplant in October that year, and they have since performed nine similar procedures.

The Shoprite award allowed her to talk very publicly about issues of transplantation and HIV - issues highly stigmatised in South Africa, said Muller.

"I hope winning this award will help to stimulate public consciousness about transplantation in general. I believe it will also make a concrete difference in the lives of the patients to whom I am able to offer treatment for terminal conditions."

Muller is currently organising a local World Transplant Day event, scheduled for 24 September at the V&A Waterfront in Cape Town. The day will include a film and photo competition, and entry forms and more information are available here.

The Shoprite Checkers Women of the Year Awards recognise exceptional and visionary women achievers who, "with determination and foresight", are making an impact on the future of fellow South Africans.