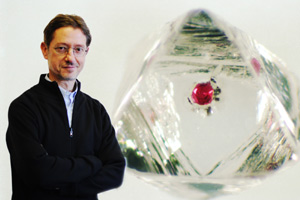 Jewellers abhor diamond impurities, but they are a bonanza for scientists. Safely encased in the super-hard diamond, impurities are unaltered, ancient minerals telling the story of Earth's distant past.

Associate Professor Stephen Richardson, head of UCT's Department of Geological Sciences, and Steven Shirey of the Carnegie Institution's Department of Terrestrial Magnetism in the US analysed data from the literature of over 4 000 of these mineral inclusions, and found that continents started breaking apart, drifting, and colliding about three billion years ago. The research, published in the 22nd July issue of Science, pinpoints when this began.

"It is astonishing that we can use the smallest mineral grains that can be analysed to reveal the origin of some of Earth's largest geological features," said Richardson.

"Impurities contained in diamonds are perfect time capsules," explained Shirey. "They provide age and chemical information spanning over 3.5 billion years that includes the evolution of the atmosphere, the growth of the continental crust, and the beginning of plate tectonics."

Using work published in more than 20 papers over a 25-year period, Shirey and Richardson reviewed the data from over 4 000 inclusions of silicate and more than 100 inclusions of sulfide from five ancient continents. Crucially, they looked at when the inclusions were isolated by diamonds forming in the deep subcontinental mantle, and the associated compositional trends.

The researchers found that before 3.2 billion years ago, only diamonds with peridotitic compositions formed, and subsequent to the three billion-year mark, eclogitic diamonds dominated.

"The simplest explanation is that this change came from the initial subduction of one tectonic plate under the deep mantle keel of another as continents began to collide on a scale similar to that of the supercontinent cycle today," said Richardson. "This transition marks the onset of modern-style plate tectonics on planet Earth."