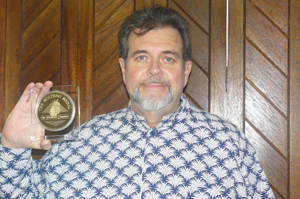 The Molteno Gold Medal for 2011 has been awarded to Alderman Owen Kinahan for "lifetime achievements in conservation". The medal is bestowed by the Council of the Cape Tercentenary Foundation for significant contributions to the fields it supports, including literature, the visual and performing arts, and conservation of the natural and built environment. He received the Cape Times Centenary Medal for conservation some years ago.

Kinahan who is a member of the UCT Council, has been heavily involved in a range of projects over the last 30 years including, most notably, the restoration and recommissioning of Cape Town's last watermill, the Josephine Mill in Newlands. In 1995 he controversially climbed in "boots and all" on the secretive process to redevelop St Peter's Cemetery in Mowbray. It turned into a three-year commitment and an emotionally taxing period that saw 10 000 exhumations, and the construction of an ossuary and Garden of Remembrance.

During his 15 years as a Cape Town City Councillor he has served almost continually on the Planning Committee and as the City's representative on the Council of the University of Cape Town where he is presently the chairman of the Building and Development Committee.

Kinahan has also been associated with the issue of the City's naming policy. He says " Now we have a good policy which includes the important directive that the City should educate and inform its citizens about the names of our streets, places and buildings."