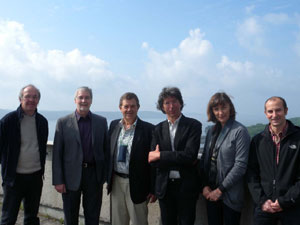 A senior UCT delegation visited France recently to discuss co-badging degrees (badges of two universities appear on the degree certificate), and ultimately joint degrees in marine science with the l'Université de Bretagne Occidentale (UBO) in Brest and the University of Montpellier (UM2).

Visser and Professor Pascal Olivard, president of UBO, signed a Letter of Intent, and a general Memorandum of Understanding (MOU) between the two universities was developed.

The trip will go a long way to strengthen the university's research in marine sciences, and boost endeavours to understand climate variability, climate change and development from the African perspective. The France-South Africa partnership in Atmospheric and Marine Sciences has already been established through the IRD and MA-RE.

According to Field, the two university delegations also discussed a Specific Implementation Agreement for co-operation in marine science, student and staff exchanges, funding for these, and mutual acceptance of each other's masters' modules, as well as the co-supervision of doctoral students.