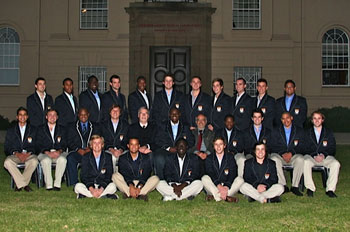 Rugby-loving students at UCT's Faculty of Health Sciences are making good use of the midyear break. A team - known as Mcdreamy's - made up of health sciences students will be going on a three-stop tour over the coming weeks. The tour will include matches against the medical schools of Stellenbosch University, the University of Pretoria and Wits University.

And the Mcdreamy's will look dreamy during their travels - the 30 squad members recently received brand new team blazers at a formal handover ceremony at the medical school, presided over by deputy vice-chancellors Professors Crain Soudien and Danie Visser.

The rugby clashes are more than just fun and games, says team captain and co-manager, Lwando 'Doc' Maki (middle, second row, flanked by, left, Visser and Soudien), as the competition builds lifelong friendships and relationships between students - and potential future colleagues - from the four campuses.