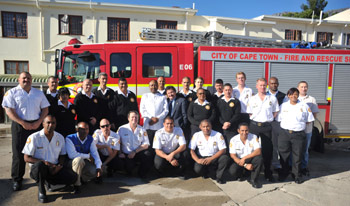 UCT has praised the City of Cape Town Fire and Rescue team who "miraculously" saved the university from disaster when they doused a fire in the PD Hahn building last year.

Presenting them with gifts on 27 May, deputy vice-chancellor Professor Thandabantu Nhlapo said it was important for the university to show its deep gratitude.

Nhlapo, who was acting vice-chancellor, said UCT values its good reputation among the top universities world-wide. "To know that that reputation was in danger of being severely dented, as would have been the case with the destruction of a scientifically-sensitive area like PD Hahn, and at the back of our even bigger sigh of relief that it did not happen, is the fact that you also saved South Africa's reputation as a top higher education destination in Africa."

Barry Alers, head of operations for the City of Cape Town Fire and Rescue's District West, said they were proud of the recognition, and assured the university that the City boasts highly-skilled fire-fighters who are equipped for any fire and rescue mission.