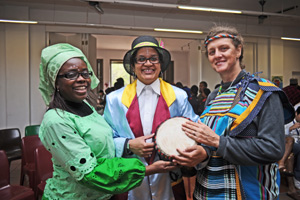 Ronelle Anthony-Jones is flanked by the Faculty of Commerce best dress competition runners-up (from left) Olufunke Adekayode and Claudia Kalil at the faculty's Africa Day celebration on 25 May.

From eye-catching outfits to lip-smacking buffets of local foods, there was plenty to savour as UCT hosted a parade of events around campus to celebrate Africa Day on 25 May.

Among them was an Africa Day festival, organised by the Faculty of Commerce, which saw the pensive artwork by artist Maurice Mbikayi of the Democratic Republic of Congo, setting the tone. The UCT jazz ensemble and third-year dance student Janine Booysens also entertained guests.

There was also a best dress competition which was won by staffer Nonnie Falala, with Claudia Kalil and Olufunke Adekayode as runners-up. Deputy-vice chancellor Professor Crain Soudien read a story, When We First Met, a tale of cross-cultural meetings in Africa, while the faculty's human resources consultant Ronelle Anthony-Jones recited a poem.

Welcoming visitors to the event, Anthony-Jones spoke of how Africa Day was initiated by the African Union, with its aim to celebrate identity, diversity as well as the potential of the continent and its people. She urged her "fellow Africans" to rise together and give the best for the continent.