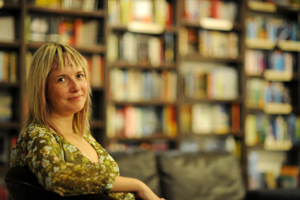 Mind-bending: Lauren Beukes has made her mark on the literary world by winning the Arthur C Clarke Award for her novel Zoo City.

Alumna Lauren Beukes made literary history when she became the first South African to win the Arthur C Clarke Award, considered the most coveted honour for science fiction writing published in the UK.

Beukes bagged the award and the £2 011 purse for her second novel, Zoo City, released in 2010. She was something of a dark horse and beat out hot favourite Ian McDonald whose The Dervish House trumped Zoo City for the British Science Fiction Association (BSFA) best novel award only days before, and the likes of Richard Powers, winner of the US National Book Award, and Patrick Ness, winner of the Guardian children's fiction prize.

(Zoo City did, however, pick up the BSFA award for best cover, by Joey Hi-Fi, aka Dale Halvorsen, for the SA, UK and French edition.)

"We had a fantastic shortlist but for me this was the clear winner," said Arthur Clarke judge Jon Courtenay Grimwood.

Published by Angry Robot Books, Zoo City is set in a dystopian and alternate Johannesburg where human sensibilities or guilt can take on real animal form, animals who tag along with their human mates, à la but not quite Philip Pullman of Dark Materials fame. The lead character, for example, is saddled with a sloth on her back.

Borrowing from classic SF, urban fantasy, magic realism and cyberpunk, among other science fiction sub-genres, as well as African mythology and popular culture, the book has received rave reviews since its release. (Although, confides Beukes, not everyone has embraced Zoo City as a worthy entry or even Clarke Award winner in the time-honoured SF tradition.) 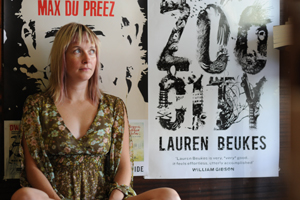 While she doesn't want to be pigeonholed as only a science fiction writer, Beukes is an avowed fan of the genre in all its forms. And, as the groundbreaking movie District 9 has shown, it offers new ways to look at South Africa, she points out. "I think science fiction is at its most interesting when it's used to distort reality in a way to get a fresh perspective on reality."

She lists her influences as everything from the works of Margaret Atwood, the first winner of the Arthur C Clarke Award, and William Gibson (who has turned into something of a patron) and cult sci-fi comic 2000 AD, to graphic novels and, well, life.

"The world seeps in. It's all the things I'm interested in and a lot of things I'm angry about that kind of come into the novel," says Beukes.

Now a full-time fiction writer after giving up her day job as a television scriptwriter, Beukes already has her three next novels in the works, some more fleshed out than others. And there are other distractions; she's in line for a few more awards, including the equally prestigious John W Campbell Memorial Award for the best science fiction novel of the year (and best cover), the sold-out Zoo City is going into a second print run, there's a procession of interviews and photo shoots, she's in discussions to do a comic, there've been "nibbles" from the movie folk, and she has a two-year-old toddler to take to parties.

Understandably, picking up a marquee book award at just 34 has cranked up the expectations. Beukes is taking the sensible approach, though. "Obviously there's a lot of pressure," she says. "And it still feels surreal, still feels unreal, and I think the best thing to do is just keep that feeling and write through it."