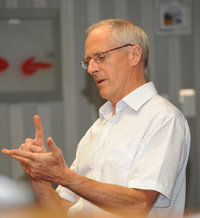 Education should get the right people to be teachers, develop them into effective instructors, and the system should be able to deliver the best instruction for every child, says Professor Sir John Holman of York University in the UK.

Delivering a lecture, Teachers: The key to success in science and maths? at UCT on 13 April, Holman said that the quality of education depends ultimately on the quality of teachers.

The event, which was attended by scholars and teachers, was organised by the Schools Development Unit and formed part of their 10th anniversary celebrations this year.

Holman, who said his aim was to close the gap between the best and the worst performing learners, noted that the world is becoming increasingly high-tech, and can't get enough science, technology, engineering and maths professionals.

Such professionals are highly rated, and learners should be enticed, as early as primary school, to consider them as possible career paths.