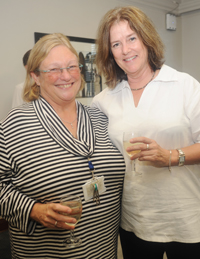 Farewell: Prof Jo Beall (left) and Prof Nan Yeld, Dean of the Centre for Higher Education Development, who will be acting DVC following Beall's return to the UK.

"UCT is a robust organisation and I will miss it - in all its idiosyncrasies: the intellectual life, the eloquence of senators making their case, the inaugural lectures, the open lectures and the panoply of exposure to an extraordinarily vibrant intellectual life," said deputy vice-chancellor Professor Jo Beall at the university's farewell to her in April.

Beall has returned to the UK to take up a position as director: education & society of the British Council, the country's international organisation for educational opportunities and cultural relations.

Clearly, one of the highlights of her two-year stint as DVC at the university was the launch of the popular Global Citizenship: Leading for Social Justice programme for students, launched last year in conjunction with the Centre for Higher Education Development. The programme is designed to get students thinking critically about confronting the challenges of the contemporary world and community participation.

"I'll miss the students and their extraordinary energy and curiosity."

Beall thanked the team at the African Centre for Cities, which she said had been her "intellectual home" at UCT.

UCT had also been a "strange and difficult" place at times, she said, citing the twin demands posed by Groupwise and bandwidth, and the ongoing struggle between the 'yellows' and the 'red' (the designated PASS and academic parking bays) on campus.

"There's always speculation when anyone leaves," Beall said, "but for me there have been many pull factors to the UK - and no push factors."

In his tribute to Beall, vice-chancellor Dr Max Price lauded her for the role she had played in confirming UCT's position as an Afropolitan university, the MoUs signed with international partners, and her role in enhancing UCT's international research profile by promoting academic exchanges and partnerships worldwide. He cited particularly links with the London School of Economics and the Worldwide University Network. Beall was also instrumental in the launch of the Confucius Institute at UCT and played a role in internationalisation, through the International Academic Programmes Office (IAPO).