Yeld steps in as acting DVC 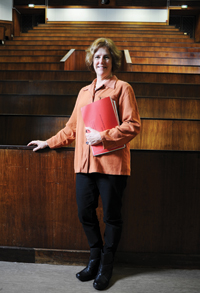 Into the breach: Assoc Prof Nan Yeld has been appointed as acting DVC, in place of Prof Jo Beall, who leaves UCT at the end of April.

Associate Professor Nan Yeld, dean of the Centre for Higher Education Development (CHED), has been appointed as acting deputy vice-chancellor in the place of Professor Jo Beall for the period of 1 May to 31 December 2011.

Yeld's term will be shortened or extended depending on the completion of the parallel process of making a full-time appointment to this position.

Beall recently resigned from UCT to take up the position of director of education and society at the British Council in London. She will be leaving at the end of April.

Beall's portfolio will be redistributed as follows: Internationalisation will be combined with Afropolitan goals under Professor Thandabantu Nhlapo. The size and shape strategic exercise will be headed by Professor Daya Reddy. The Executive Director: Libraries will report to DVC Professor Danie Visser. Co-ordination of the 'First Year Experience' has been transferred to DVC Professor Crain Soudien.

Yeld will be responsible for academic planning, teaching and learning, graduate attributes, the reporting lines for Institutional Planning and Information and Communication Technology Services (ICTS), and general DVC activities such as selection committees, executive management and official functions.

Yeld has a long association with UCT. She obtained her Bachelor in Education degree in 1978, and later her MEd in 1987 (with distinction) and PhD in 2001.

She was appointed dean of CHED in July 2003.

Yeld has been involved with academic development since the late 1980s, with a focus on developing procedures and instruments for widening access to university study for students from educationally disadvantaged backgrounds. Her work is well known locally and internationally, and has attracted considerable interest for its innovative approaches to assessment.

Yeld currently represents the higher education sector on the Ministerial Working Group to oversee the development and implementation of the National Senior Certificate for adults. This is one of several other appointments by successive ANC ministers of education to serve as chair and member on various ministerial committees, investigating such issues as the future of the Senior Certificate, differentiation in school curricula, the assessment at key National Qualification Framework exit levels, and the status of independent and foreign examining bodies.

Yeld's publications are in the areas of language, assessment and academic development.

She was a Senior Africa Fulbright Scholar, based at the Educational Testing Service, in Princeton, New Jersey, over 1999 and 2000, and a Nelson Mandela Fellow at Harvard in 2002 to 2003, based at the WEB Du Bois Institute for Afro-American studies.