We are the champions! 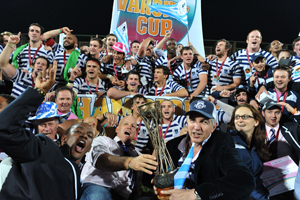 Yes, it was touch and go and it took a few years longer than it should have, but UCT's Ikey Tigers were finally crowned Varsity Cup champions last Monday, this after beating a stubborn University of Pretoria by 26-16 in the final at the Tuks Rugby Stadium in Pretoria. And despite having two tries denied by the television match official (TMO).

In the pre-match interviews, both coaches were adamant that they would be sticking to their tried-and-tested game plans - Ikeys would run the ball; Tuks would dominate with their pack.

It was the Ikeys, however, who drew first blood, as number eight Greg Mallett touched down with just one minute on the clock. Flyhalf Demetri Catrakilis, top scorer for Varsity Cup 2011, converted, giving UCT a dream start and a 7-0 lead.

Things fell apart for the Tigers after that, though. UCT's lineouts - as was the case in other matches - went awry. They struggled to protect the ball, barely got out of their half (tenacious tackling kept them in the game, however), and the referee's calls all seemed to go against them.

It was Tuks who applied all the pressure, and by the first strategy break UCT was trailing 7-13, having conceded two penalties, a try and a conversion. The Tigers fell further behind after another Tuks penalty (7-16), but a three-pointer by Catrakilis just before half time helped the Tigers reduce the deficit to six points as the sides went into the break with the score on 10-16.

It would be a match of two halves for UCT.

Two Catrakilis penalties in the first 16 minutes of the second half levelled the scores (16-16), and the referee's calls suddenly went the Ikeys' way. Not so those of the TMO, who denied scrumhalf Nic Groom what appeared to be a clear-cut try shortly after.

UCT persevered, however, and as the Tuks players tired, began to create more openings. Hooker Matt Page benefited from the extra space, and he touched down in the 60th minute, and gave UCT the lead again (21-16). Catrakilis, flawless on the night, converted (23-16 to UCT).

Then the always inventive Marcel Brache touched down in the corner in the 69th minute, and the game appeared to be all but done. Except that the TMO turned down the try.

Instead, the referee awarded UCT a penalty, which Catrakilis put between the poles, giving the Ikeys enough breathing space at 26-16.

The Tuks then threw everything at UCT, but the Ikeys defence stood firm.

By the 84th minute the referee finally called the game to an end, and UCT had their first Varsity Cup trophy.

"It was a true, hard final," commented Man of the Match, Catrakilis afterwards.

In the end, though, UCT just had too much to lose on the night.

"I know it was our third final, and maybe we wanted it just that much more," said captain, Nick Fenton-Wells, in the post-match interview as he shared a few words of condolence with the Pretoria players.

Vice-chancellor, Dr Max Price, was among the university officials who accompanied the team to Pretoria.

"It is a great win," said Price. "We are extremely pleased to finally be crowned champions of the Varsity Cup! We have made it to the final in three of the past four years so this is not just luck. The team and everyone around them have worked hard over the past few years. It is wonderful to finally taste the victory!"

And the Tigers had shown themselves to be worthy of the title, Price added.

"We have proven that we are, home or away, a rugby force to be reckoned with. The Ikey Tigers may not have been among the most-fancied sides when this competition first started, but our name is now synonymous with the Varsity Cup. We wish to thank all the teams that have participated and the many supporters on all sides that make this Cup so vibrant. To the losing team in the finals, we want to say that you were formidable opponents and we thank you for the excellent spirit in which you hosted us here in Pretoria."