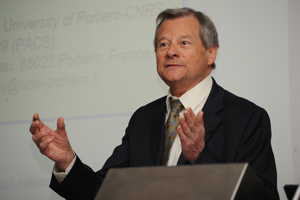 Pointing ahead: Prof Claude Lamy of the University of Poitiers, France, was one of the presenters at the course.

The National Hydrogen Catalysis Competence Centre of the Department of Science and Technology (DST) at UCT, aka HySA/Catalysis, has hosted its first short course.

"We have great scientists here and state-of-the-art laboratories," he said. "This course will encourage the transfer of cutting-edge knowledge."

HySA/Catalysis, which is co-managed by Mintek, South Africa's national mineral research organisation, is one of three competence centres that sprang from the DST's National Hydrogen and Fuel Cell Technologies Flagship Project, better known as Hydrogen South Africa or HySA.

HySA's aim is to create knowledge and human-resource capacity that will develop high-value commercial activities in hydrogen and fuel-cell technologies using local resources and existing know-how.

"South Africa has more than 75% of the world's platinum group metal reserves," said Conrad. "HySA's objective to achieve a 25% share of the global hydrogen and fuel cell catalysts market is ambitious, but doable."

HySA/Catalysis received its first project funding in 2009, and kicked off work at UCT, Mintek and affiliated institutions. The centre already has 18 projects under way, of which 12 are based at UCT.

"And this is but the start," added Conrad.