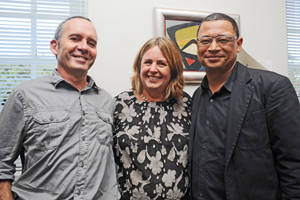 Professor Susan Parnell, of UCT's Department of Environmental and Geographical Sciences and the African Centre for Cities, is the recipient of the 2010 Alan Pifer Research Award for her work in urban poverty reduction and environmental management.

The annual award highlights the strategic goal of promoting socially responsive research, and honours a UCT researcher whose outreach work has contributed to the advancement and welfare of South Africa's disadvantaged people.

Pifer was a philanthropist, a president of long-term UCT benefactors the Carnegie Corporation, and the founding chair of the UCT Fund. He died in 2005.

"Susan's immense contribution to research has helped inform government policy," said Faculty of Science dean Professor Anton le Roex at the presentation event on 24 March. "Her work has set the social responsibility benchmark for the faculty."

The motivation statement for the award lists some of Parnell's many accomplishments since becoming involved in welfare policy debate in the post-apartheid period, when she contributed to the South African NGO Coalition's Poverty Hearings. Parnell also served on the Advisory Board of Isandla Institute, a think-tank NGO focused on addressing the lack of policy research on the growing urban poverty problem, and she is currently a member of the board of Sustainable Energy Africa.

Parnell's academic work reflects her involvement with a number of key studies for the Cape Town Municipality. These academically rigorous policy reports underscore the fact that ideas about reducing poverty are not abstract notions, but could be mainstreamed into the specific roles and responsibilities of the municipality.

Parnell has also worked on the urban dimensions of poverty reduction that fall under national government departments, where she has been involved in developing key studies to assist in poverty reduction strategies, for the treasury, the presidency and other sectoral departments.

As the first director of the African Centre for Cities 'CityLab' programme, Parnell has been a major force in promoting the notion of the co-production of new knowledge that is directed at solving entrenched urban problems. She chairs the Cape Town Climate Change Think Tank, a partnership grouping of university, city and civil society intellectuals working on the urban implications of global environmental change.

"I usually dislike these big occasions," said Parnell on accepting the award, "but there is great value in marking them, as you get to see the many people who influenced your work. Thank you for giving me the space and the opportunity to engage."