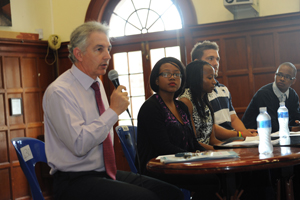 Spirited, yet collegial discussion arose at the Student's Representative Council-facilitated student panel discussion when participants debated the topic To Whom does UCT belong? at the Molly Blackburn Hall in mid-March.

Price asked whether a university should belong to anyone, and said that one of the answers was that UCT belongs to the world and has a global responsibility.

Ngwenya said she did not believe UCT belonged to everyone, and that at its core it must remain a space for intellectual enquiry; and that it should serve as a symbol of what society can attain.

The Black Management Forum's Makhubu said although he believed UCT was currently in "the hands of the elite," every student had a right to be heard at UCT. "Africa should rightfully claim what belongs to them," he added.

Some of the discussion centred on the currency of the 'Ikey' brand, and participants had differing views on whether the university benefited from brand-building so closely aligned with UCT rugby. Ngwenya said that all members of UCT should feel they have ownership of the Ikey brand, and that other sporting codes and societies could use the halo effect of the brand to their advantage.

Fenton-Wells said that rather than being divisive, sport had the potential to unify students with common interests, and he urged all students to make use of the wide range of sporting facilities available to them. "Team sports especially facilitate success and help integrate and bond students to the university." Responding to later criticism of the Rugby Club's seemingly elevated status at UCT, Fenton-Wells said that sponsorship deals and the fact that the Intervarsity Series was televised nationally had propelled UCT's rugby team into the spotlight.

Responding to a question from the audience about student participation in university governance, Price explained that the SRC is represented on almost every important committee at the university, and reminded the assembled students: "They are your voice."