CD gives sound to an exhibition 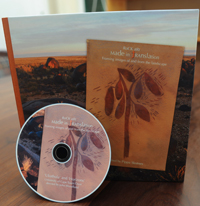 The UCT Choir has produced a CD that adds a distinctive voice to a new book and exhibition celebrating both African landscapes and rock art.

Made in Translation: Images from and of the landscape, on show at the Iziko South African Museum until September, is showcasing the ways in which landscapes have been translated or transformed via rock art. The exhibition is curated by Iziko's Petro Keene and Professor Pippa Skotnes, director of UCT's Michaelis School of Fine Art. Skotnes also edited Rock Art: Made in Translation - Framing images of and from the landscape, a book accompanying the exhibition. The CD is included with the book.

At the exhibition launch last year, the UCT Choir was asked to perform their piece, Sounds of Africa, which is an evocation of a thunderstorm and the sounds of birds and insects, Skotnes noted.

"I wanted the interpretation of a thunderstorm and the sounds of the landscape to be playing in this space [the exhibition] to draw attention to the act of translation."

In the end, the choir produced an expanded version which included the lullaby Ukuthula and Peter Louis van Dijk's piece, Horizons.

The CD is on a continuous loop in the exhibition, allowing visitors an opportunity to immerse themselves fully in the content of the exhibition, says choir director John Woodland.

"Including the CD in the book allows people to take the sounds of the landscape home with them."

The UCT Choir is planning to release their first CD, which will include the thunderstorm sequence, soon.