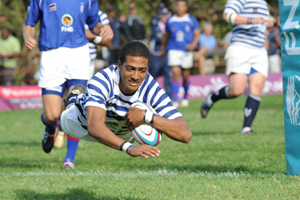 Brilliant Brache: Marcel Brache is one of the two UCT players who have been nominated for this year's Varsity Cup Player that Rocks awards. The other player is Eben Etzebeth

UCT Ikey Tigers, Eben Etzebeth and Marcel Brache, are among nine nominations for the various Player that Rocks competitions, part of the Varsity Cup, which is now into the semi-final stages.

The winner in each category will receive a Hertz-sponsored car - for one year - along with cash prizes; R15 000 for the overall Player that Rocks, and R5 000 (each) for the Forward and Back of the tournament.

All eight coaches were asked to nominate their outstanding players this season. Those were whittled down to three players in each category.

Voting is now open for readers - on the Varsity Cup website and via the Rapport newspaper - to have their say about their number-one player.

With 'phase one' of the Player that Rocks process complete, and the nine top players having been chosen, Varsity Cup managing director Duitser Bosman has urged the public to get involved by voting for their favourite player. "These players were nominated by the coaches from the eight Varsity Cup teams - now the public can bring out their votes to determine the winners," he said.

The competition closes on the day of the 2011 Varsity Cup Final; Monday, April 11, at midnight.