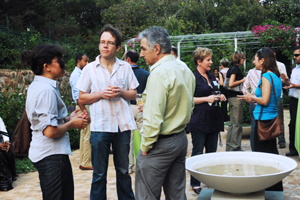 UCT's high international ranking seems to be a draw card not only to prospective students, but to staff as well, attracting employees from as far afield as the US and Europe.

Among staff members who were welcomed by vice-chancellor, Dr Max Price, at a function on 17 March, were Dr William Horowitz from the US and Belmira Carreno, who has worked in Barcelona, Spain.

Like many other new staffers, they considered the move to UCT to be a wonderful opportunity, the university's eye-catching surroundings a further appeal.

As Zimkhitha Mqutheni of the Development & Alumni Department and Lazola Magobiyane of Information and Communication Technology Services put it, the opportunity to study while here is just a cherry on top of the cake.

Price told the new staffers that a university can be a lonely place as people often work in silos, and urged them to use the welcoming function, and other gatherings, to network. He encouraged people to take part in activities and structures available, such as clubs and committees, saying "it is important to create a community across the university".