Marriage proposed as the future for African studies at UCT 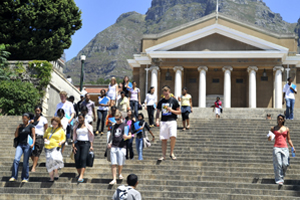 The perceived threat to the future of UCT's Centre for African Studies (CAS) and African Gender Institute (AGI) was the topic of a lively public forum between students, staff and executive management on 25 February.

The forum followed a statement by dean of the Faculty of Humanities, Professor Paula Ensor, on year-long discussions on merging CAS, the AGI, the Department of Linguistics and the Department of Anthropology into a new department, tentatively titled the New School for Critical Enquiry in Africa.

The restructure, explains Ensor's statement, is a two-stage process. The departments will first merge under an interim placeholder name, the Department of Anthropology, Linguistics and Gender Studies, as a step towards the creation of the new school.

Some students have protested what they see as the dissolution of African studies at a university that positions itself as Afropolitan.

But Ensor was explicit in refuting this viewpoint in opening the discussion.

"What we are talking about this afternoon is not murder," said Ensor. "This is not about the elimination of anything UCT offers at the moment. This is about marriage. Some students have opposed the closure of CAS, but do they also oppose the idea for a new school? This is what we need to discuss."

Associate Professor Jane Bennett, head of the AGI, voiced her concern that the department may lose its identity with the merger.

"Why would the AGI be interested in moving beyond its space?" Bennett asked.

"We're worried. We're feminists, and we're wondering where that is going to go. We're profoundly supportive of radical queer politics. We have experts around conflicts and peace, and around gender and media, whose programmes are very important to us. We will have to think about how to re-imagine them in this space."

UCT's student newspaper, Varsity, report that some students share the concern that smaller departments would disappear in the merger.

CAS alumnus Ryan Williams commented: "My fear is that UCT will only become known for servicing adventurous suburban Americans on semester abroad courses instead of being a leading venue for thought on the continent."

Deputy vice-chancellor Professor Crain Soudien stressed the need for forward-thinking, arguing that African studies around the world has become locked in a conservative position.

"I'm a product of 1976 when the question of this centre [CAS] was first discussed, so there is a great deal of nostalgia for me," said Soudien. "The loss of the name itself would mean a lot to me. But we now live in different times. We are going through a stage in which we are re-imagining what we are intellectually."

Soudien argued that the proposed school would open up new spaces for dialogue and enable UCT to become a more hospitable place, and a world centre for African studies.

"We're absolutely committed to this [Ensor's] statement and what it stands for," he said. "In the spirit of hospitality, of course it's going to happen in the humanities faculty, but it must also happen across the university."

Deputy vice-chancellor Professor Thandabantu Nhlapo added his voice to the argument for change. "I have a feeling that if the status quo remained, a lot of the doors that we plan to open for Afropolitanism will be shut. It's really that simple for me."