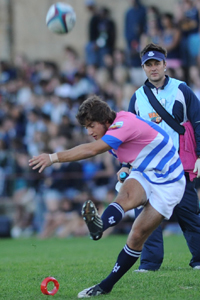 It's not just that the Ikey Tigers have won their first three 2011 Varsity Cup games, but how comfortably - some more than others, maybe - they've done so.

They started off with a nervous but still convincing 26-10 win against the University of Free State's Shimlas, a team of whom much is expected this year, in Bloemfontein on 7 February. A week later they earned their first bonus point, outgunning the also-fancied Pukke from North-West University by 36-8 in Potchefstroom. And last week, on 21 February, at times they made scoring look easy, touching down six times in a 49-12 drubbing of Nelson Mandela Metropolitan University (NMMU) - despite not always playing sparkling rugby (blame that on the blustery conditions).

That self-belief that the coach, Kevin Foote, spoke about at the start of the competition may just be kicking in. "The guys have no doubt that they're good enough to win this whole thing," said Foote before the game against Shimlas.

There can also be no doubt that flyhalf Demetri Catrakilis has added a new element to UCT's game - kicking points. Under pressure in the opening stages of their game against NMMU, for example, Tigers were nonetheless 12-0 up within 15 minutes, all thanks to Catrakilis' pinpoint kicking.

By the end of the third match day he was the Varsity Cup's leading scorer, on 51 points.

But even with that healthy tally, Catrakilis has contributed less than half of the side's 111 points up to now - giving UCT a points-scored difference of 81.

It's the unity among the players, said Foote, that's really set UCT apart this year.

"We started off as a young team, but we're really coming together now."

UCT will have a chance to cement their position at the top of the log when they play Tshwane University of Technology (TUT) - who're been blowing hot and cold so far - at home on 28 February. The crunch match comes on 7 March when they host three-time champions Stellenbosch.

UCT will probably want to take advantage of the notoriously windy conditions on their home ground. Especially when they play into the wind, which suits their game plan better, as they showed against NMMU, said captain, Nick Fenton-Wells after that match.

"It's not in UCT's DNA to kick the ball at all. We just want to look after the ball and play as much rugby as possible."

It's also good to see that UCT students are turning out in bigger numbers for the home matches. That may well be useful when the vocal Maties fans travel here.

The matches against TUT and Maties will both kick off at 17h00, and will be televised on SuperSport 1. 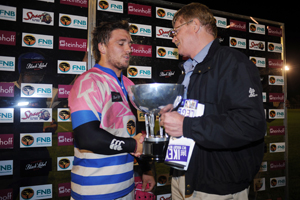 The UCT-NMMU clash was also an emotional one as the sides were playing for the MontÃ© Taljaard Floating Trophy, established in 2008 in honour of the late UCT player who hailed from Port Elizabeth. (UCT donned special shirts to mark the occasion.) UCT has now won the trophy in all four years (2008-2011), and Taljaard's father, Sydney Taljaard, was on hand to present it to UCT captain Nick Fenton-Wells.