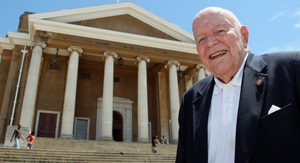 Henry "Bud" Kreh, who was an Ambassadorial Scholar at UCT in 1950, on the steps of Jameson Hall during the Rotary International Reunion programme.

Specifically, UCT hosted the reunion of a number of alumni who have over the past 60 years benefited from Rotary International's suite of education grants, notably for its Ambassadorial Scholarships, Group Study Exchange and Rotary Peace Fellowships programmes.

These cover travel both ways.

So, thanks to the Ambassadorial Scholarships, UCT has hosted over 200 scholars from nine countries since 1947, while around 30 UCT graduates have travelled overseas on such scholarships. They include Professor Jennifer Thomson, who spent 12 months over 1974 and 1975 at Harvard University in the US, and Francis Moloi, now the country's High Commissioner to India, who did likewise over 2000 and 2001.

In turn, American Ray Klinginsmith, now president of Rotary International, and compatriot Henry 'Bud' Kreh, among more recent visitors, spoke of their years at UCT over 1960 to 1961 and 1950 to 1951, respectively.

And it's been a programme that has served everyone well, said vice-chancellor, Dr Max Price, with many of the visiting scholars maintaining their links - often professional - with South Africa and its communities.

"Evidence shows that the continent and the country have benefited enormously from this," Price noted.