Centres of excellence up the research game 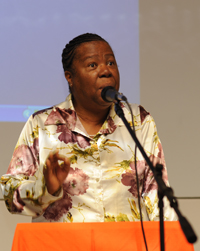 Upward and forward: Minister Naledi Pandor of the National Department of Science and Technology.

As Dr Albert van Jaarsveld - president and CEO of the National Research Foundation (NRF) - pointed out, there's a lot to learn from the country's eight Centres of Excellence (CoEs).

At the annual CoEs symposium, hosted at UCT by the NRF and the national Department of Science and Technology (DST) on 1 February, Van Jaarsveld ran through some of the centres' success stories. These include a healthy and growing number of master's and doctoral graduates since the CoEs Programme was launched by the DST and the NRF in 2004, around 400 peer-reviewed publications in 2010 alone, plus a host of local, national and international collaborations; all, he stressed, on about R15 million in funding per year.

"What this demonstrates to us is that the CoE instrument is very effective at upping our game and strengthening our outputs," said Van Jaarsveld. "And it's a model, I think, we should be exploring in the system."

That sentiment was echoed by UCT vice-chancellor Dr Max Price. "It's clear from the recent international review of the CoEs," said Price, "that together they have the potential to bring a significant slice of South African research into the bracket of world-class research excellence."

Among the guests at the event was the Minister of Science and Technology, Naledi Pandor, who received potted introductions to each of the centres, including the two hosted at UCT - Birds as Key to Biodiversity Conservation, run from the Percy FitzPatrick Institute of African Ornithology, and the Centre of Excellence in Catalysis, aka c*change, in the Departments of Chemical Engineering and Chemistry. (UCT is now also a partner in the Stellenbosch University-based Centre of Excellence for Biomedical TB Research, co-headed by Professor Valerie Mizrahi, newly appointed director of UCT's Institute of Infectious Disease and Molecular Medicine.)

In particular, Pandor pointed to the role that the CoEs can play in tackling issues specific to South Africa and Africa.

"I think, for me, it is really very, very encouraging when we see the centres really looking at what the issues of development are that we might begin to address."