Summer Schoolers write up a storm 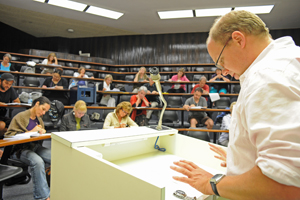 There are only 20 spots available on the Summer School's Creative Fiction Writing course each year, and according to hosts, UCT's Centre for Extra-Mural Studies, those spots get snapped up in a flash.

According to feedback, part of the appeal of the course is lecturer Ron Irwin, a freelance editor, literary agent and writer and lecturer on UCT's master's in creative writing. Another attraction is the opportunity for aspiring writers - the course is aimed at "serious beginner writers", according to the Summer School handbook - to polish their craft.

"I think everyone has a dream of writing a novel that sells a million copies; or maybe even a thousand copies or a hundred copies," says Irwin.

So he crams what he calls "basic editorial principles" - covering characterisation, dialogue, point of view and the like - into five intense two-hour sessions over the first week of Summer School. The kind of stuff, he says, that will improve anyone's writing. 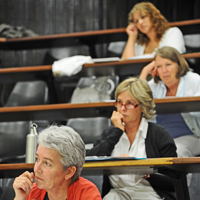 Shaping the story: In writing, there's always plenty to think about.

Participants may be 'beginners', but many have manuscripts in the works. For those there's the option to graduate to the Advanced Creative Fiction Writing course, also conducted by Irwin and which runs in the second week of Summer School. This is aimed at writers with extended manuscripts and who have completed the Creative Fiction Writing course.

Just like that best seller the writers dream of, the 20 spots available on that course also fly off the shelves.