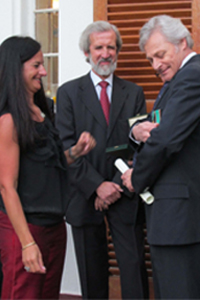 Going back to my roots: Prof Mino Caira is formally presented with the title of Cavaliere, an Italian knighthood, by Dr Emanuela Curnis at a ceremony in December.

UCT's Professor Mino Caira celebrated his roots in December when the Italian government awarded him the title of Cavaliere, or Knight.

Caira was formally presented with the national title - Cavaliere dell'Ordine al Merito della Repubblica Italiana, or Knight, Order of Merit of the Italian Republic - by the Italian consul in Cape Town, Dr Emanuela Curnis, at a ceremony on 5 December. Caira now shares the honorific with his immediate neighbour in the Department of Chemistry, Emeritus Professor Luigi Nassimbeni.

Caira received the award in part for his celebrated academic work in the field of chemistry and his longstanding collaborations with universities and pharmaceutical companies in Italy. In addition, the award recognised his role as president of the Cape Town branch of the Zonderwater Block Association of Ex-POWs for over a decade.

This association is named after the camp at Zonderwater, a farm area near Johannesburg, where Italian prisoners of war were held between 1941 and 1947. Caira's father was one of the 90 000 or so Italian POWs who lived in the camp, and one of a select few hundred who chose - and were allowed - to remain in South Africa after the war.

These days the association is made up mainly of the descendants of the original POWs, most of whom, like Caira's father, have since died. So the presentation of the knighthood had its poignant moments.

"My first thought was of my father," says Caira, "and I kind of silently dedicated [the award] to his memory."