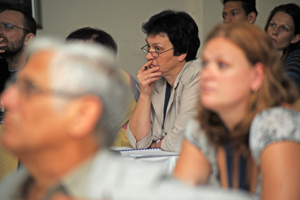 The fledgling South African Cell Death Society hosted its coming-out event this week, the 1st Cell Death Symposium, a meeting that the group hopes will become an annual feature.

Between 30 and 40 delegates, comprised of local and international researchers and graduate students from around South Africa, met at the Two Oceans Aquarium on the V&A Waterfront from 10 to 12 January to explore the symposium's theme, Cell Death in Diseases. In keeping with the broad span of the field, talks and posters covered a slew of diseases, although cancer appeared to be the common denominator.

Not too surprisingly, presenters and students dedicated much of talks and posters to the mechanics of cell death. (Essential in the study of cancers, where scientists are scrambling to find new ways to kill off cancer cells.)

Given that it was the first of its kind, the symposium had many objectives, explained UCT's Dr Lester Davids, who organised the event alongside Dr Marianne Cronjé of the University of Johannesburg. For one, the symposium set out to market the new society, a chapter of the International Cell Death Society, among the many potential South African members - physiologists, cell biologists, biochemists and cellular biologists among them.

But the teaching and retention of graduate students were foremost among the meeting's aims, said Davids.

"We wanted to encourage students who may be thinking of leaving the sciences that this is exciting and relevant stuff."

A message echoed in the keynote lecture by Professor Richard Lockshin of St John's University in the US. He spoke of the latest developments in the study of cell death, and the many questions still begging to be answered as clinicians and scientists attempt not just to kill cells (as in cancer), but also to protect them as they battle neurodegenerative diseases.